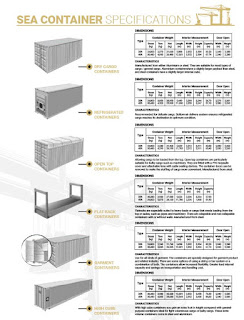 This situation I described in my previous post (cf. “Before Containerization…” below) started to change in the 1960s with the introduction of the “container” and the containerization of the trade between the United States and Europe at first and, subsequently, of the rest of the world (for the full story of containerization, see my 60-page saga "gigantism in container shipping, ports and maritime logistics").


The innovation entailed in the concept of containerization is credited to Malcolm Mclean: an American trucker who thought of separating the tractor from the trailer part of his trucks, standardizing (unitizing) the latter (trailer) so as to be able to be transported—with its contents intact—by various transport means, handled at ports by standardized cargohandling equipment (cranes, straddle carriers, reach stackers, etc.), and stacked uniformly one on top of the other, both in ships and at terminals.

The container, or the maritime container, as it is often called, is a fairly robust and sturdy structure, manufactured at very high standards, intended to withstand the harshest of conditions, such as those often prevailing on the high seas. Containers are waterproof, vandal-proof, and adequately ventilated, to avoid possible accumulation of condensation, and, if treated well, they could give their owner many years of problem-free service (the average economic life of a container is 15 years). There are many types of containers (high cube, flat rack, open side, open top, tank, reefer [refrigerated], etc.), depending on the intended use (cf. figure).[1]

Containerization is often described as a revolution in transport. General cargo goods are now increasingly carried in steel boxes (containers) of standardized dimensions; most common is the 8 × 8 × 20 foot container known as TEU—Twenty-foot Equivalent Unit—although containers of double this size (40 feet) are increasing in importance.[2] Perhaps one of the most important effects of containerization is that, now, containers can be packed (stuffed) and unpacked (stripped) away from the busy waterfront, either at the premises of the exporter (consignor) and/or the importer (consignee), or at Inland Container Depots (ICD), warehouses, and distribution centers (dry ports).

Expensive and often unreasonably strongly unionized port labor is thus bypassed; pressure on port space relieved; and ship time in port minimized. These developments have increased ship and port productivity and system reliability immensely, thus allowing ships to become even bigger, achieving significant economies of scale and, consequently, lower unit transport costs and thus international competitiveness. Actually, as I have discussed many times in the past, the economic incentive behind the construction of ever larger ships is modern day port efficiency and productivity, rather than technological advances in ship design, or economies of scale at sea (which are lost if the ship has to wait in port). Nowadays, containers are increasingly carried by specialized cellular containerships many of which able to carry more than 20,000 TEUs, while designs for 25,000 TEU ships—or bigger—are already on the drawing boards of naval architects.
In parallel, by-passing the waterfront in the stuffing and stripping of containers, and thus having them ready in port to be handled by automated equipment, has increased immensely the punctuality, predictability and reliability of cargo movements and transport systems, enabling manufacturers and traders to reduce high inventory costs through the adoption of flexible Just-in-Time and Make-to-Order production technologies. Inter alia, such technologies have helped manufacturers to cope with the vagaries and unpredictability of the business cycle and plan business development in a more cost effective way. Indisputably, containerization has been the kindle wood under global logistics and supply chain management. Furthermore. The concept of logistics does not regard only cargo systems, but it permeates every aspect of our everyday life. For instance, in a reliable transport system, I know precisely what time I need to leave home to make it to the airport. But if taxis are frequently on strike; rail under continuous maintenance; or security controls at airport a mess, I need to leave home an hour earlier. This hour is “my” inventory cost.

Around the world, the port industry has invested a lot, in order to cope with the technological demands of containerization. Modern container terminals and commensurate cargohandling equipment have been built and new, more efficient, organizational forms (including privatization) have been adopted in an effort to speed up port operations. Operational practices have been streamlined, the element of uncertainty in cargo flows largely eliminated, forward planning has been facilitated, port labor regularized, and customs procedures simplified. These developments took place in the firm understanding of governments and local authorities that ports, now, constitute the most important link (node) in the overall door-to-door supply chain and thus inefficiencies (bottlenecks) in the port sector can easily wither all benefits derived from economies of scale and scope in transportation and logistics. Since 2000, the measurement of port efficiency has thus become a key research area in maritime economics, pioneered by the Maritime Economics & Logistics (MEL) Journal.

[1] For more on containers, their production, use, leasing market, etc., see my 2016 report for Davenport Laroche “Liner Shipping, Containerization and the Container Leasing Market”, freely downloadable from my ResearchGate and Academia profiles.

[2] Although, for reasons of simplicity or easy reference, the standard maritime containers (TEU or FEU) are often referred to as 20x8x8 or 40x8x8, their height is actually 8 ft 6 in. Moreover, the hi-cube 40-footer, with a height of 9 ft 6 in, is assuming increasing importance, representing, according to certain estimates, the majority of maritime containers in service in recent times.

Posted by Professor HE Haralambides at 19:59