India, Russia and the Persian Gulf: A new OBOR in the making? 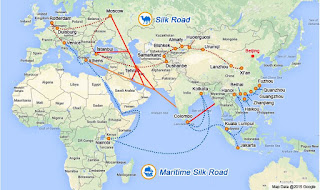 The Chinese One-Belt-One Road (OBOR) initiative is a US$ 1 trillion plan, with an estimated economic multiplier of 2.5. However, since the initiative was first announced in 2013 by President Xi of China, only 5% of this budget has been spent. There are as many plans as interested countries, and China is talking to most of them.

This impressive transport network consists of a “Belt”, i.e., overland transport connecting China to Europe through Central Asia; and a “Road”, i.e., a maritime return-route from southern Europe, through Suez, back to Asia. The Mediterranean Basin is therefore ‘central’ in this network which, looking at Chinese investments in Australia, central- and south America, could be easily extended to a global around the world transport system. Such a development assumes more concrete credence, after president Trump’s withdrawal from the Trans-Pacific Partnership (TPP) and, possibly, from NAFTA too in the near future.

Although Arabian Gulf ports are not yet part of this network in any visible way, the Region’s importance cannot be underestimated, as seen also by Chinese investments in Oman, Qatar, etc., as well as India’s interest in the Iranian port of Chabahar, so as to ‘bypass’ the (for her worrisome) Pakistani port of Gwadar, developed by China.

In short, and particularly for ports in the Upper Gulf (MAK, Umm Qasr, Bandar Imam Khomeini), the region could constitute a (land) alternative to Suez, at the same time connecting the Gulf to the Mediterranean Sea. In addition, a ‘port system’ such as this, would and could serve the vast hinterlands of Iraq, Iran, Turkey, all the way up to Moscow, thus connecting to OBOR (Belt) through Russia’s North South Transport Corridor (NSTC).

Could such a scenario be feasible in the short- to medium term? The answer is 'yes', and much of the infrastructure is already there. The only thing it will take is a firmer understanding that progress and welfare are better achieved through economic cooperation rather than political conflict. HH
Posted by Professor HE Haralambides at 12:44 No comments:

Sergio Ermotti (UBS): "We ought to listen to what people say: The benefits of globalization are clearer to emerging economies than to developed countries"

[excerpt from my new book, written 20 years ago]:
[...] The western world has been losing out in this zero sum game, as it has proven to be after all. The West’s initial enthusiasm with globalization and trade liberalization was based on a false premise: i.e. that its saturated economies and increasing returns to scale industries could only survive if and only if the West could expand the international market for its exports. Unfortunately, this didn’t happen. Instead of producing ‘here’ and exporting ‘there’, Foreign Direct Investment (FDI) started to flow ‘there’, producing ‘there’ and, often, re-importing back ‘here’. Profits of European multinational companies have not been repatriated in a way that would allow us to sustain our welfare systems and way of life, developed over decades with the taxes of our fathers and forefathers. These systems are now being unraveled in the pursuit of the Holy Grail of cost competitiveness, and as a result of a mentality of ‘cheap consumerism’ which, if it does not change, it will be signing the economic death certificate of, at least, Europe... HH
Posted by Professor HE Haralambides at 12:18 No comments:

Mother, should I work in a port? 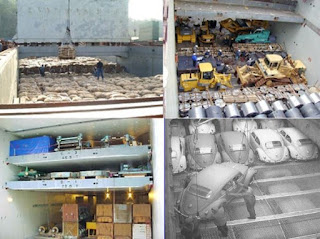 [The recent New York Times article* reminded me of this photo which I had collated some time ago, appearing in my forthcoming book]
_________
In the earlier days (up to the beginning of the 1960s) general cargo, carried by liner ships, was transported, in various forms of packaging (pallets, boxes, barrels, crates, slings), by relatively small vessels, known as general cargo ships. These were twin-deckers and multi-deckers, i.e. ships with holds (cargo compartments) in a shelf-like arrangement where goods were stowed in small pre-packaged consignments (parcels) according to destination (figure).

This was a very labour-intensive process and, often, ships were known to spend most of their productive time in port, waiting to load or discharge. And although seafaring was great fun in these days [sic], the same cannot be said for casual port work which was rather ill-considered and looked down by society.

As a result of the unpredictability of port work, port management could not possibly employ permanent staff, paying them while idle, and waiting for the next ship to arrive. Labour was thus casual, i.e. employed for as long; as much; and whenever required.

Recruitment of dockers was very different too. Each morning, a number of dockers would present themselves to a union foreman, often a mobster, and he, on the basis of certain ‘criteria’ that had more to do with natural selection rather than anything else, would thumb-in the youngest, the strongest, the favorites of the Union, or those prepared to return a kickback to the Union.To indicate this ‘preparedness’, the latter dockers used to put a toothpick behind their right ear.[1] The rest would return to their ‘locales’ [sic] and indulge in whatever it was they were indulging in.

Containerization and the new cargo-handling techniques changed all this by taking work away from the waterfront to inland consolidation areas, or to the backyard of the manufacturer who would stuff/strip the container at his own good time. Port labor was thus reduced by 90%, while at the same time labor productivity increased tenfold. Port management had to make generous concessions to docker unions, including the setting up of 'funds' to compensate port workers for the fewer hours they now had to work as a result of automation. In a number of countries, including the US, such 'funds' exist even today, topped up by carriers, and at rates such as $5/ton of cargo handled.

In spite of the reduction in numbers, port union strength has remained largely unchanged and it is not uncommon, in many western ports, to see 'closed shop' salaries well above 100 thousand dollars per year.


Labor 'rigidities' such as the above often lead to large gang sizes, excessive over-manning, little labor mobility and high port user costs. In many ports around the world, the inflexible and monopolistic supply of port labor has effectively discouraged intended private sector activities around the port and has, thus, deprived the latter from one of its main functions, that of being a "growth pole" for the region and the country.

[1] A beautiful account of the “waterfront” can be watched in Elia Kazan’s 1956 masterpiece “on the waterfront”, with Marlon Brando (soundtrack: Leonard Bernstein), or Mike Newell’s 1997 drama “Donnie Brasco”, with Al Pacino and Johnnie Depp.


Posted by Professor HE Haralambides at 10:47 No comments: