The impact of alliances on container shipping and ports

[Short excerpt from my submission to the European Commission in the context of its public consultation on the evaluation of the consortia block exemption regulation].

Please cite this document as:

I have often remarked that gigantism in container shipping has been induced by both port competition and shipping alliances. Indeed, without the possibility to use each other’s ships, no carrier by himself alone would be able to achieve a capacity utilization high enough to justify the use of present day mega-ships, while at the same time offering the frequency that shippers require.

But carriers have gone a step too far: At the time of writing, three alliances[1] carry 80% of global trade. Such consolidation, in an industry that is already highly concentrated, is bound to finally attract the scrutiny of the regulator who, with the final consumer in mind, is likely to encourage more competition rather than further consolidation. If this happens, i.e., if container shipping becomes more open and competitive in the future, and if alliance agreements regarding vessel sharing, investment planning, etc. are scrutinized more closely for their compatibility with competition law, as I expect, the joint filling of the ship will become more difficult and ship sizes shall by necessity decrease, together with an increase in the number of ports of call. Low prices would then be achieved through more competition rather than big ship sizes. This is the more so when it is doubtful if the economies of scale in shipping are passed on to the final consumer, as required by the consortia block exception from the provisions of competition law in Europe.

A voice from the past: the ‘second scenario’[2]
There are a number of macro-trends that, in addition to the above, might advocate for smaller ships and more port calls; particularly the latter. In a nutshell: (a) Transshipment costs and if they can help it shippers prefer to have their goods as close to them as possible; (b) Consolidation and distribution use land infrastructure without paying full costs for the private use of a public good; (c) The external costs of hub-and-spoking (congestion; pollution; accidents) may at times be as high as 2% of European GDP.

I thus argue that transshipment, warehousing and distribution don’t come cheap, as our enthusiasm with logistics often assumes. It is good to keep this in mind and thus make sure that the costs (internal and external) of logistics operations are paid in full, including the costs of using public infrastructure. The latter, because (to a large extent) infrastructure is no longer a public good and thus the user-pays principle should in principle apply.

Posted by Professor HE Haralambides at 13:01 No comments: 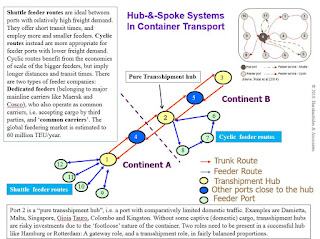 Mega-ships and mega-ports are the two faces of the same coin: the one ‘feeds’ and reinforces the other, and the one cannot exist without the other. I prepared this infographic in an effort to explain to a wider audience, in as simple a manner as possible, the ‘concept of hub-and-spoking’ (HS), in other words the intrinsic relationship between mega-ships and mega-ports.

The HS idea is quite enticing as a start: Simply put, “it is cheaper to ‘shuttle’ between hubs with a bigger ship and then distribute, rather than call directly at smaller ports, with smaller ships, serving a smaller demand”.  A mega-ship can realize significant economies of scale as long as a) it sails full; b) spends most of her time at sea. To achieve both objectives, she must limit her ports of call to a minimum number of hubs, such as ports 1, 2, and 3 (calling also, however, at some additional ports such as 4 and 5). Port 2, let us say Singapore, is a ‘consolidator’: It attracts cargo, destined for Europe (or North America), from places as far away as Australia, Indonesia, Philippines, India, etc., and it has it ready, at its modern terminals, waiting to be expediently picked up by the mega-ship as soon as the latter arrives. Remember: such a ship cannot wait much and if it has to, before too long she may be looking for another, more efficient hub.

Port 1 in Northwestern Europe, let us say Hamburg, is a ‘distributor’ and the process is reversed: Our mega-ship arrives, drops its ‘call size’ (i.e. the number of containers destined for that particular port) within a tight time-window, and departs. What happens next, i.e., how Port 1 shall manage to distribute to its hinterland, as efficiently as possible, a huge inflow of thousands of containers, is not our ship’s concern; rather, our ship looks at this challenge as a NIMBY (not-in-my-back-yard) question.

Leaving it at that, the HS freight system is preferable to direct calling, reducing notably transport costs, in spite of the substantial feedering operations which are required (too many studies have convincingly shown this and I won’t attempt to repeat them here). In addition, the ‘consolidation-distribution’ operations around the hub ports create substantial economic activity for transport operators (road; rail; inland waterways; short-sea-shipping).

When it comes to feedering operations, there are two systems in daily practice, depending on the amount of freight volume available: If the latter is adequate, a shuttling system is often used, like the one between hub 1 and regional ports  9-12. When regional cargo traffic is limited, however, a cyclical feedering system is preferred, such as the one between hub 2 and feedering ports 6, 7 and 8. Finally, we also have two types of feeder companies: Dedicated feeders, belonging in other words to major carriers like COSCO, and common feeders, i.e. shipping companies that offer their services to all major carriers indiscriminately.

But we should not leave it at that; not any longer. As I have argued many times since 2000, starting with my “second scenario”:[1]
·

In the last quarter of a century, economies of scale in shipping, distribution and logistical systems have totally changed our lives to the better. But transshipment, warehousing and distribution don’t come cheap, as our enthusiasm with logistics often assumes. It is good to know this and thus make sure that the costs (internal and external) of logistics operations are paid in full, including the costs of using public infrastructure. The latter because (to a large extent) infrastructure is no longer a public good and thus the user-pays principle should apply.

One might counter-argue on the above that, in this way, higher transport and logistics costs would be passed on to the final consumer, as it usually happens with privatization. This may or may not be so, depending on how competitive transport and logistics markets are. But even if it is so, what is certain is that the final consumer will now be paying less taxes to develop ‘private’ infrastructure.
On balance, he should be indifferent.