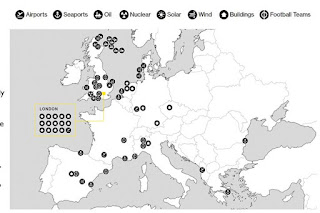 Since 2013, when President Xi Jinping announced his grandiose vision of a shared future through better connectivity, the amount of Chinese foreign investment has been mind-boggling. Various consultants have estimated this to be in the neighborhood of  €250 billion whereas, according to Bloomberg (see map), more than €300 billion has been invested in Europe, during the last 10 years.

Particularly in Europe, investments are not limited to infrastructure but comprise such heterogeneous things as nuclear power stations, theaters, historic buildings, football teams, restaurants and more. Many, if not all, of these investments are ‘baptized’ “BRI investments” to the extent that, for some observers, BRI has become synonymous to “money”.

It is not unreasonable, therefore, that the cash-strapped countries of the European South have been quite ‘eager’ to engage in a dialogue with China, starting with Greece and Spain and followed, recently, by Italy.  This development has evoked the dismay of the European North (Germany in particular[1]), as well as of a part of the Chinese citizenry, which is questioning the usefulness of investments in far away places, in the wake of rising unemployment and the cooling of economic activity at home.[2]

A part of western concerns on BRI investments consists of what has come to be known as debt-trap diplomacy. The Sri Lankan Port of Hambantota has often been quoted as a case in point. The practice is not unknown to certain western ‘financiers’, however, and in short it consists of extending excessive loans to borrowers, usually under onerous terms, when the lender knows (or should know) that the debtor will be unable to repay. The alleged aim is to extract economic or political concessions from the debtor country and/or to eventually swap debt with equity; i.e., in our case, the lender takes over control of the port. Some others argue that China might be buttressing repressive regimes, exploiting developing countries in a neocolonialist manner through high interest rate loans, and most of all seeking to coerce countries to align with China’s key strategic and military objectives.

President Xi’s vision, however, is quite the opposite: […]BRI aims to replace estrangement with exchanges between different civilizations; replace clashes with mutual learning; and replace a sense of superiority with coexistence; it aims to boost mutual understanding, mutual respect and mutual trust among different countries. In this light, the BRI is seen as a path towards global peace […].[3]

Whether accusations such as the above are true or not, in the case of BRI investments, remains to be seen. So far, the majority of such concerns and criticism originate, understandably, from China’s competitors, it is anecdotal, published in dubious outlets, or lacking scientific verification.[4]

For instance, loans to Sri Lanka (Hambantota) were rather concessionary (2%), while the country’s largest debt is to Japan and not to China. The case, to my view, was one of wide Sri Lankan public sector corruption rather than anything else. As regards China herself, in all honesty she should have known that, with the port of Colombo just around the corner, the prospective of Hambantota was meager at most.

The case of the Port of Piraeus is not much different either: At the time of writing, the Greek government rejected a €600 million port investment plan on grounds of archaeological finds. Also at the time of writing, a mounting Chinese disillusionment with the port of Piraeus has led China to start looking at the Italian ports of Trieste and Genoa. Since it was leased to COSCO, however, the port of Piraeus has become one of the fastest growing container ports in the world, soaring to the 36th place in global container traffic rankings, from the 93rd in 2010. The port has only 10 Chinese staff but employs 1,000 Greeks, and it has created more than 10,000 indirect local jobs.

One thing is for sure though and this was made crystal clear by President Xi Jinping at Davos in 2017:

If America decides to retreat from its global responsibilities, China would gladly pick up the slack.

[1] Interestingly, in this period, Germany has received 10 times as much as all the others together (with the exception of the United Kingdom).
[2] The IMF growth forecasts for 2019, for China, are down to 6%.
[3] Quoted by Yang Jiechi, Member of the Political Bureau of the Central Committee of the Communist Party of China and Director of the Office of the Central Commission for Foreign Affairs. China Daily, 30 March 2019.
[4] To address this ‘lack of substantiation’, for a number of years now I am trying to engage Chinese academics and high-level researchers in investigations like: which ports should be included in the New Silk Road? With which ports should China partner in Europe and West Africa? How should Chinese industry ‘relocate’ in the wake of a continuously developing New Silk Road? What ship types (and sizes) should better serve the New Silk Road? Etc. Much of this research has already been published.

Posted by Professor HE Haralambides at 14:10 No comments: