Introducing the novel concept of 'Composite Connectivity' (of ports)

A lot of ink has been shed lately, both on the concept of (port) connectivity and on the aspirations of many ports to achieve international hub status.

The importance of connectivity in particular, is today assuming greater dimensions in view of the strength of global shipping alliances (GSA), their ability to jointly ‘manage’ the supply of tonnage, and the negative impact such power has had on the frequency of services; the number of companies calling at a port; on containership sizes; and on call sizes.

However, connectivity alone cannot explain the importance (and prospects) of a port as an international hub, its attractiveness to shippers, and its ability to develop new transshipment traffic (no matter how well connected a port is in the Arctic, or in Tierra del Fuego, it will never assume hub-port status). We argue that connectivity needs to be combined with measures of centrality, as these are derived from advanced network theory.

We thus introduce the novel concept of composite connectivity: Through an innovative use of Two-Stage Data Envelopment Analysis (DEA) and complex network theory, we first evaluate the efficiency of ‘basic connectivity’ and use this as input in the second stage, which measures the strength of centrality. To do so, we employ such network theory measures as betweenness centrality, closeness centrality, and eigenvector centrality. The “Composite Connectivity Index” - CCI is thus obtained as the ratio of (our measures of) port centrality to port connectivity. The top nine mainland China ports are used as a case-study.

Our results (and rankings) conform to the general perception on the international importance of the ports of Shanghai, Shenzhen and Hong Kong. The usefulness of CCI as a decision-support tool for ports with hub aspirations, as well as for their financiers and investors is, we believe, obvious.

Posted by Professor HE Haralambides at 12:27 No comments:

Port devolution vs. recentralization: A reversal of conventional thinking? 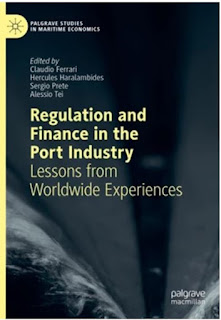 From a historical viewpoint, the strategic significance of the port industry, both for foreign trade and national industrial development, has led many national governments to seek an active involvement in the development and control of port infrastructure. However, the scarcity of public financial resources; the unwillingness of the public sector to assume the market risk of specialization;  the limited ability of the public administration to run complex, risky, and increasingly commercialised activities, such as those of container terminals; the interest of carriers in having their own dedicated terminals and, finally, the increasing appetite of the private sector (Global Terminal Operators - GTO) in the often very lucrative port terminal investments, have given way to the devolution of decision-making authority from the ‘centre’ to the ‘periphery’. A period of national port reforms has thus started in the 1980s and 1990s, which is still underway in many countries.

Port reforms range from the simple commercialization of port operations to corporatization, and all the way up to full port privatization. But the private sector’s involvement in port business has often given rise to conflict between port and city administrations, particularly municipalities, many of which still believe that it ought to be themselves the lawful managers of ‘their’ ports [During my years as the manager of the Italian port of Brindisi, I vividly remember, the then mayor of the city, and member of the port’s supervisory committee, never missing the opportunity to declare that ‘he did not participate in committee meetings just in order to raise his hand and vote, but he was coming there to actually manage the port’!].

A reversal of the devolutionary trend can however be observed, increasingly, today, i.e., a recentralization of decision-making powers, through the integration of regional ports under a single authority. The trend is being championed by China, followed by Italy and other European countries. The premise behind this is simple: devolution has led to homogeneity of the port service, meaningless port competition and waste of scarce financial resources[1]. However, basic infrastructure such as that of ports is there to provide the platform on which companies compete, but it ought not be the subject of competition itself. Co-opetition is thus the new port model. In this, the development of basic port infrastructure (berths, terminals, channels, breakwaters, etc.) is centrally coordinated, to maximize regional benefit. The infrastructure is then meant to be used by private (or public) companies, i.e., port service providers such as terminal operators, towage companies, pilot corporations, stevedores, and a miscellany of port-related activity, in competition among themselves[2]. Competition here could be ‘competition in the market’ or ‘competition for the market’, the latter being the preferred model (concessions) of most ports[3]. But, to make this point crystal clear, someone needs to be out there to veto my ego-boosting managerial decision to build a new terminal, just because my next-door neighbour is doing so, or because carriers, in possession of significant market power these days, can successfully play one (container) port against the other.-

[1] I am not aware of a port-city not proud of its port: the need for expansion, real or imaginary, is always on top of the agenda of every city administration, particularly during periods of local elections.

[3] I have described the difference between the two models in earlier communications. Competition for the market is the preferred model of the European Commission.

Posted by Professor HE Haralambides at 17:25 No comments: