What is a port? 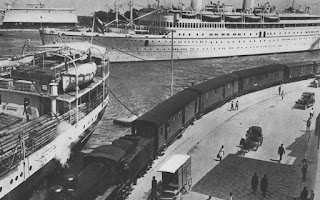 A port is generally understood as the interface between sea and land, where goods change mode of transport, e.g. from ship to truck or rail and vice versa. To operate safely, a port needs to be protected, or harbored, from the elements of nature (waves, winds, currents) by such things as breakwaters and windbreakers, but also by essential port services like towage, pilotage and line-handling which assist the ship to berth and start in safety its cargo-handling operations. The latter operations require a wide spectrum of port equipment such as ship-to-shore cranes, straddle carriers, reach-stackers, forklifts and more.

The figure shows a part of the historic Port of Brindisi, South Italy, at the turn of the previous century (c. 1920). The train would arrive right at the waterfront --something very uncommon at that time-- in the true sense of intermodality (see below), 100 years before the term was invented.[1]

Although the general public may understand the importance of ports (and shipping) for trade, growth and prosperity, most people have never visited or seen a port at close distance. Rather, the impression people have of a port is usually one of an exotic spot, of romanticism, adventure or organized crime. Cinematography has helped a lot in creating this impression: A beautiful account of the “waterfront” can be enjoyed in Elia Kazan’s 1956 masterpiece ‘on the waterfront’, with Marlon Brando, or Mike Newell’s 1997 drama ‘Donnie Brasco’, with Al Pacino and Johnnie Depp.

To put things in perspective, a port can be anything from a sheltered stretch of sea, protecting a handful of fishing boats somewhere in the South Pacific; a block of cement in a small Greek island, on which a passenger ferry would lower its ramp to disembark passengers; a buoy onto which a tanker would moor to offload its oil through a pipeline; a finger-pier alongside which a bulk carrier would unload its coal on a conveyor belt; a cool port (i.e. a refrigerated facility) in Latin America exporting fruit to Europe; a mega-yacht marina in Monaco or Nice, or just a water-taxi that would disembark passengers from a cruise ship anchored in the middle of the sea, outside Amalfi, in the absence of any berthing infrastructure at the picturesque village of South Italy. At the other end, there is the mind-boggling Yangshan Deep Water Port (of Shanghai), handling 40 million containers a year, or the equally impressive industrial complex of the Port of Rotterdam, running for 40 kilometers along the river Meuse to the North Sea, comprising in its domain a cluster of thousands of companies, from the large refineries of the oil majors,  to the small paint shop, inconspicuously hidden under an abandoned bridge, next to a pub.  HH

(Introduction of my chapter on ports, in Elsevier's 'Transport Encyclopedia', edited by Roger Vickerman, which will appear at the end of this year / beginning next).

[1] The train, coming from London and Paris, would bring to Brindisi ‘la valigia delle Indie’, i.e. the diplomatic bag (actually a trunk) and other mail and documents heading for India. Crossing Suez was great fun and an adventure, but the ladies had to be careful with the scorching sun. Thus, cabins had different prices with the most expensive ones being the posh (i.e. Port-Out-Starboard-Home). At the very same spot, Phileas Fogg and Passepartout (Jules Verne: Around the World in 80 Days) were waiting to board P&O’s m/s Mongolia. Fogg was worried of a delay but Passepartout was reassuring him that, opposite to sailing ships, steamships were never late!

Posted by Professor HE Haralambides at 16:36 No comments: