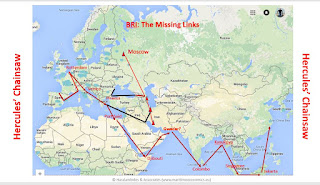 Following a long legal dispute with the concessionaire (DP World of Dubai, UAE), the Government of Djibouti decided today to unilaterally terminate the concession and seize the Doraleh Container Terminal (DCT), operated by DP World. From what it is known, the dispute concerns the government’s wish to renegotiate the concession agreement; and no doubt, DP World understands what this means… But there’s more to this dispute that meets the eye.

In view of its geographical location on the Horn of Africa (Gulf of Aden; see map), and its function both as a gateway port to Ethiopian trade and as transshipment hub, Djibouti is a very strategic port and a modern day Cerberus, watching the entrance to the even more strategic Red Sea.

As a result, Chinese interests in this port-city  are also very strong: China Merchant Holding International (CMHI) has developed and financed the new Doraleh Multipurpose Port (DMP), next to the defunct old port, so as to relieve city congestion and turn the old port and its waterfront into a business and recreational district. A Free Trade Zone is also being planned by CMHI next to DMP.

As competitors, DP World and CMHI do not quite see eye to eye, and doubtful if they could both ‘fit’ in the tiny state, even if they wanted. Moreover, it is becoming increasingly known that UAE is deploying naval forces in the neigh of Djibouti, while China has already been promised a naval base there.

In conclusion, let me say for one more time: “trade and infrastructure” go a bit further than just counting containers and making port rankings; quite a bit actually...

Posted by Professor HE Haralambides at 15:06 No comments: