Artificial Neural Networks in the prediction of tanker freight rates 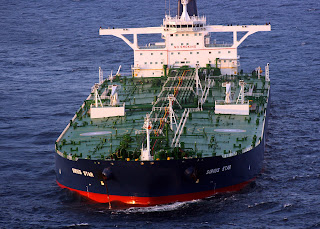 I always start my classes in shipping economics by defining econometrics as the art of saying what is going to happen and then explaining why it didn’t. But it may not always be so.

Notwithstanding the notorious volatility and unpredictability of shipping freight rates, research appearing soon in Maritime Economics and Logistics looks quite promising. Artificial Neural Networks (ANN) and Genetic Algorithms (GA) are used to develop forecasting models of the tanker market with remarkable predictive accuracy. These models outperform by far traditional time-series forecasting models, and are able to predict seasonality, trends and cyclical movements much more accurately. HH
Posted by Professor HE Haralambides at 12:40 No comments:

Can the Baltic Dry Index (BDI) be used as a crystal ball? 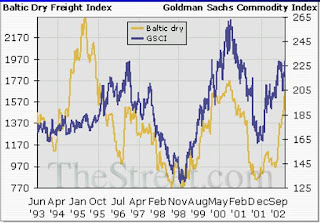 This year, the Baltic Dry Index (BDI) or BIFFEX, as some of us involved in its creation still call it, celebrates 30 years of existence. The BDI, which is nothing more nothing less than a weighted price index of dry bulk freight rates, was created as a hedging instrument: by taking long or short positions in a futures paper market, traders (shipowners and charterers) can partially hedge actual physical market risk. And although the BDI has never fully achieved this objective, having been scorned often by risk-prone shipowners, it nevertheless offers us a long series of prices, which is most useful in business cycle analysis.

But could BDI be used as a leading or lagging indicator of economic activity? Let’s have a look at the graph which, together with BDI (yellow line), presents the Goldman Sachs Commodity Index (GSCI) (blue line). Observe the high correlation in the 5-year period 1997-2002. What is more interesting however is that the BDI envelops, as we say, the GSCI throughout this period. In other words, during an economic downturn, BDI is a leading indicator of economic activity. Or, to put it differently, freight rates are good leading indicators of oncoming recessions. The opposite is true in a rising economy: by looking at commodity markets, one could (carefully…) take a view on shipping developments and expectations, particularly as regards newbuilding investment timing; sale & purchase; and chartering decisions; i.e. short (spot) or long (time) charters. (Apologies to my shipowning friends for revealing their secrets…). HH
Posted by Professor HE Haralambides at 12:33 No comments:

Ro-Ro Terminals and Motorways of the Sea: We need to do better Short-Sea-Shipping and Motorways of the Sea (MoS) constitute today important parts of Europe’s transport policy (TEN-T), not only in order to relieve pressure from road transport but, equally importantly, to connect third countries to the Union. Our research so far has focused on the optimization of container terminal operations. But the requirements of Ro-Ro terminals are quite different, particularly as regards scarcity of space (obviously you cannot stack trucks on top of each other…). Important research appearing soon in Maritime Economics and Logistics shows that the factors playing a fundamental role in the design and optimization of Ro-Ro terminals include ship designs; number of gates; road connections; urban traffic; urban pollution; IT systems for port-urban traffic monitoring; and customs procedures. Although truck loading/unloading operations are these days quite short, the time a truck needs to wait at the terminal is still fairly long and this, as a consequence, impinges on terminal space which, often, does not exist in many parts of the world. Problems compound exponentially in multi-user terminals, and terminal concessions are thus increasingly becoming the order of the day. HH
Posted by Professor HE Haralambides at 13:29 No comments:

Containerization and the concept of "relevant geographic market" 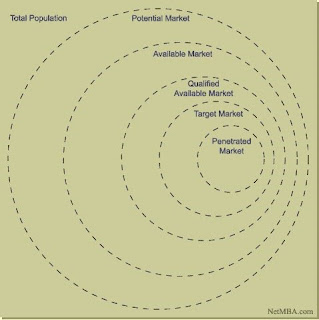 My earlier post on concentration and market definition (December 8) has led, interestingly, to a number of questions and requests for clarification on the concept of relevant geographic market. I thought I should do this with the help of an example and the graph I attach here.

From a competition policy point of view, the concept of ‘market’ which is of interest is the relevant geographic market. In other words, this is the physical place where consumers and suppliers interact for the acquisition/provision of a good or service, and where competition among suppliers is prevalent. The consumer is expected to have ample choice, i.e. enough substitute goods should exist for him to choose from. In the form of a witticism, although, say, Maersk Line covers a global network, the service it offers in South America is not of much use to a consumer in Antwerp, and unless the latter decides to move house, he cannot substitute that service for a bad one he may be receiving in Antwerp, neither can he do so if Antwerp tariffs go up. In this sense, the two markets in our example are distinct and geographically irrelevant from a competition policy point of view. Global concentration, in this sense, means very little, as do concentration measures, like the Herfindahl Index, applied at such an aggregate (global) level.

A market has thus a geographical attribute which is of relevance in determining concentration and competition. For instance, the market of the city where the port is located is fairly captive. But as the port tries to extend its hinterland towards the region, the country or the continent, the market becomes just a potentially targetable market, with more players and thus more competition (see Figure). To give another example: The Shanghai-Hamburg port-to-port market may be highly concentrated, with just a few carriers offering services, but if one were to consider that the market is the door-to-door importation of bicycles made in Wuhan, China, to Paris, France, then the market is highly competitive with many players offering services, using not only those two ports but many others, at both ends of the trade. Simply put, if the market is port-to-port, it can indeed be concentrated; if however the market is door-to-door, including a miscellany of add-on logistics services, it could well be considered as not concentrated at all. HH
Posted by Professor HE Haralambides at 17:25 No comments:

CMA CGM – NOL merger and market definition: It is the supply chain stupid 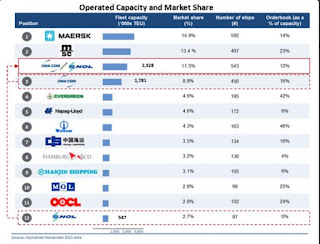 Assessed on a global level, industry concentration in container shipping does not seem to be a problem: The market shares of the top 20 carriers in the graph correspond to 16 equally-sized companies. Were one to look at specific market segments, however, the picture could be quite different, and market concentration could pose a serious concern. This said, before regulatory authorities set market share thresholds, in order to approve or not a merger, they first need to define the relevant market; and this is where the difficulties start. For, although a port-to-port traffic (and market shares) could be quite concentrated, served by a handful of carriers only, the door-to-door one is not, and choice there is plentiful. There are 43 different ways to bring to Paris a bicycle manufactured in Xi’an, China, although there may be only three European ports (Antwerp, Rotterdam, Hamburg) that are involved in this traffic. Today, it is not ports that compete but supply chains. And these define the relevant market. HH
Posted by Professor HE Haralambides at 07:40 No comments: