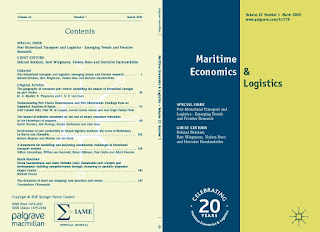 […]In spite of the sustained growth of port throughput worldwide, as well as of the substantial infrastructure investments of ports and their efforts to reform and modernize, hinterland transport—representing 60% of the costs of the global maritime supply chain—has not kept pace; productivity in the maritime leg of the supply chain has not been followed by productivity in its hinterland part, apart from the introduction of double-stack trains in the US in the 1980s, or the adoption of the dry port concept in the 2000s.

Moreover, the gigantism in container shipping is straining port infrastructure and cargohandling capacity, causing significant diseconomies of scale, which propagate throughout the supply chain. For many seaports, the weakest link in their transportation chains is hinterland access, due to congested roads and inadequate or non-existent rail connections, causing delays and increases in transport costs.

[…]A reversal of trends can recently be seen however. From the earlier days when ports were obliged to move downstream to find space, ports now look back to their hinterlands to find the additional space they require. Inland intermodal terminals (or dry ports) are thus mushrooming, connected to seaports by rail, road or inland waterways. As such, inland intermodal terminals are usually developed close to railway and motorway junctions to facilitate the transfer of containers between modes of transport, favouring, to the extent possible, the more environmentally friendly transport modes, such as rail and inland waterways[…]

Posted by Professor HE Haralambides at 19:37 No comments:

Georgia's Anaklia mega-container facility on the “Belt and Road” backpack? 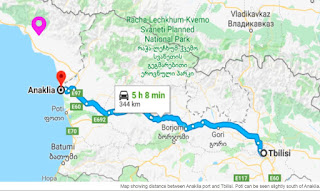 The 2.5 billion deep-water mega container facility at Anaklia has been shelved. The ‘official’ explanation is that the Anaklia Development Consortium (ADC) has been unsuccessful in securing finance. The true reasons, however, may be quite different, having more to do with regional geopolitics rather than anything else.

In a surprise move, the Georgian government has issued an authorization for the development of Anaklia’s southern rival, the port of Poti. The bid has been won by APMT (Maersk group). Looking at the latter’s plans, I cannot say I am very impressed however. These are about an initially general cargo facility, eventually developing a 300m container berth of limited drafts (11m).

The Poti authorization is a strategic move of high complexity, given that, at the same time, the Georgian government is talking to various international institutional investors (including China), in an effort to secure the financing of Anaklia. I am certain the government will succeed, and a new bid will be launched soon. Anaklia is a very strategic node on what I have earlier called  “a missing link of BRI”, i.e. that of connecting the Caspian and the Black seas, continuing to central Europe through the Romanian port of Constanza on its western part, and connecting to the Bandar Abbas (Persian Gulf)-Tehran-Baku (Azerbaijan)-Moscow North-South Corridor  on its eastern part (also strongly eyed by India). I launched this idea 4 years ago in Kuwait, and we were happy to see, last year, an implementation agreement signed between the governments of Turkmenistan, Azerbaijan, Georgia and Romania.

I expect that the Anaklia project will be re-launched very soon. One of the requirements would be the upgrading of the Baku-Tbilisi-Anaklia railway. If this happens, the Poti project will have to be scaled down, limiting itself to general cargo throughput only. The distance between the two ports is too short and, to my view, there is not enough room for container facilities in both ports.
This would be a waste of good money.

HH
Posted by Professor HE Haralambides at 11:47 No comments: