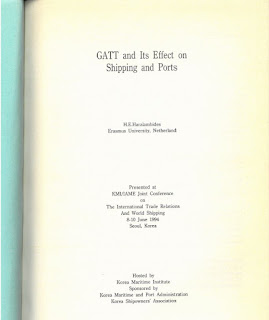 In 1994, together with the late Richard Goss and the Korea Maritime Institute (KMI), we organized the Seoul KMI/IAME conference on “International Trade Relations and World Shipping”.

Next year, 28 years later, KMI will again organize the IAME annual conference in Seoul (together with SISI) and they asked me to lend a hand again; probably in a gesture of respect rather than anything else.

I immediately said ‘yes’ and as I was drafting my reply I couldn’t help thinking that walking down the memory lane, reliving one’s own journey to Ithaca, might for some be more challenging that the journey itself.

But the memory lane is worth sailing; all 28 ports of call.

P.S. The photo was sent to me this morning by Professor Yong An Park, Chairman of the Organizing Committee.

Posted by Professor HE Haralambides at 22:04 No comments: 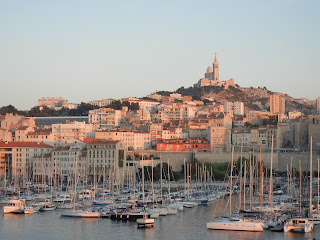 Shift-share analysis (SSA) was introduced in Creamer (1943)* and has been widely used as a tool of economic analysis in most areas of economics, predominantly in regional and urban studies.

In our forthcoming research, we use SSA to understand the evolution of port systems (e.g., Adriatic, Tyrrhenian, Mediterranean, Persian Gulf, North Sea, Pearl River Delta, East and West-Coast US, etc.) and the competitive forces acting upon ports in proximity.

In short, the idea here is to decompose port traffic growth in two constituents: one (share) which is due to the general growth of the economy, and the second (shift) which is growth achieved at the cost of a port’s competitors. The SSA decomposition has a great appeal also in cases of staff productivity premia or executive pay. And this is so because for the share part, in a way an automaton, we have only our good fortune to thank. But it is really only the shift part of growth for which one should be rewarded; i.e., growth that outperforms the market or, differently, market share ‘stolen’ from one’s competitors as a result of good management (and staff) performance.

Years ago, while running a small Mediterranean port, I managed to introduce such a premium (and executive pay), in spite of ferocious resistance by both management and employees. In the end, reasonableness prevailed among my dedicated staff.

Posted by Professor HE Haralambides at 20:49 No comments: