Chasing the “Holy Grail’ of Economies of Scale in Shipping 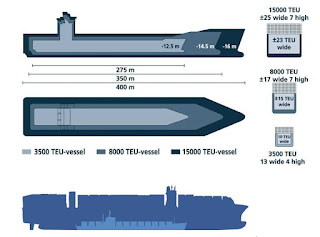 In liner shipping, the pursuit of Economies of Scale (EoS) through bigger and bigger ships is something like the pursuit of the Holly Grail. Thirty years ago, the largest containership would just pass through the locks of the Panama Canal and it had a size of roughly 4,700 TEU (known as a Panamax-size ship).[1] Today, the size of the largest containership is five times that, i.e. about 22,000 TEU. What are therefore those EoS, and are they as important as carriers tend to believe?

Economies of Scale (EoS) refer to the situation where unit costs (i.e. cost/dwt or cost/slot), in other words the costs relevant to pricing and competitiveness, decline as ship size increases. This decline is more pronounced in the case of shipbuilding costs, manning costs and fuel costs. Simply put, you don’t need twice the amount of steel in order to build a ship twice the size, nor twice the crew to sail it, or fuel to move it. In the case of shipbuilding (capital) costs in particular, the above figure speaks for itself when it comes to the relationship between cargo-carrying-capacity (CCC) and ship dimensions: The almost doubling of CCC, from 3,500 to 8,000 to 15,000 TEU requires only moderate increases in ship dimensions and, most importantly, draft. This shouldn’t surprise us: The amount of steel I need to build a ship increases linearly while CCC increases in the cube of dimensions.

The bottom part of the figure (borrowed with many thanks from the Port of Hamburg) is even nicer: The larger ship (March 2018) is the CMA CGM 'Antoine de Saint Exupéry': 400 meters long, 59 meters wide, with a container capacity of 20,776 TEU. In her gut (May 1968), like Jonah in the gut of the whale, is the "American Lancer": 213 meters long, 26 meters wide, with a container capacity of 1,200 TEU. The Antoine is just twice as long and about twice as wide as the Lancer, but it can carry 17.3 times more cargo (20,776/1200)! What better example could one need to explain economies of scale? The question however is: can our ports continue to cope with this kind of gigantism? Should they? My answer is clear and unswerving: They can (could) but they shouldn't.


[1] The size of a panamax ship was determined by its beam which could not naturally exceed the 33.53 meters width of the Miraflores locks of the Panama Canal. As the ‘beam to length’ ratio of a ship is fairly fixed ( in heavy weather, a ‘sausage’ type ship could easily break in two if, when loaded, it found itself at the top of two wave crests), the maximum size of a panamax containership was about 4,700 TEU. At a beam of 33.5 meters, the ship can carry 33.5/2.5=13.4, or 13 containers across (counting containers astern is an easy way to impress your interlocutor, when asked about the size of a ship…).

Posted by Professor HE Haralambides at 08:16