From Just-in-Time (JiT) to Just-in-Case (JiC) logistics, or April’s Fool? 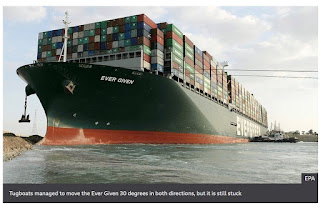 One of the great advantages of the container revolution has been the reliability it has afforded to the global production-transport-distribution system. It was as a matter of fact the container that ushered in the JiT systems and the consequent minimization of inventories.

JiT has impacted not only transport, but each and every aspect of our lives. When I travel, I know exactly what time I must leave home to get to Schiphol airport by, say, 17h45. But if the Metro does not run; the taxis are regularly on strike; or the motorways congested during peak hours, then I need to leave home one hour earlier. And this hour is my own ‘inventory cost’.

In ports in particular, containerization totally revolutionized the landscape: i.e., port operations, planning, development, competition, and the regularization of port labor. Pressure on port space is now relieved, and ship-time in port minimized. These developments have increased ship and port productivity immensely and have allowed ships to become ever bigger. By-passing the waterfront in the stuffing and stripping of containers, and thus having them ready in port to be handled by automated equipment, increased immensely the predictability and reliability of cargo movements, and enabled manufacturers and traders to reduce high inventory costs through the adoption of flexible Just-in-Time and Make-to-Order (MtO) production technologies. Inter alia, such technologies have helped manufacturers to cope with the vagaries and unpredictability of the business cycle and plan business development in a more cost-effective way.

Maersk’s boss, Soren Skou, seems to believe that all this may be changing. In an interview in the Financial Times (April 1, 2021) he seems to claim that we may be willing to shift away from JiT and MtO, in other words, we may be prepared to assume higher inventory costs, in order to protect ourselves from disruptions such as those of COVID-19 or the blockage of Suez by Evergreen’s Ever Given.

This is indeed a shot from the hip and I would strongly question it: The costs of securing our supply chains, reconfiguring them and making them more resilient to disruption, are far far less than the costs we would be imposing on our fine-tuned global trading system by an increase in inventory costs (and the implied unreliability); we have made this calculation countless times.

Of course, for a carrier, some unreliability might come in handy but, this time, the consumer will just not buy it.

Posted by Professor HE Haralambides at 11:41