A “missing link” in China’s Belt-and-Road Initiative: Connecting The Caspian- to The Black Sea and Beyond (Rotterdam) 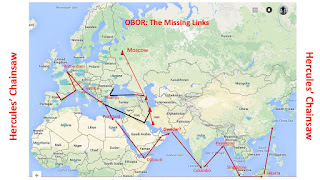 The first time I threw around my ideas of connecting the two great seas, The Caspian- and the Black Sea, seeing this connection as a missing (multimodal) link in China’s Belt and Road Initiative (BRI), was in 2016 in Amsterdam (TOC Europe). A roadshow followed (aimed at ‘selling’ the idea to interested parties) to Shanghai, Baku, Kuwait, Tehran, Marseilles, Rotterdam, Venice, Hamburg and Brussels.

Through the Baku-Tbilisi-Kars railway system (BTK), running south of Caucasus, the link would connect the new port of Baku (President Aliyev’s top national priority) to the Georgian ports of Batumi, or Poti, or -why not- the 2.5 billion dollar port of Anaklia, once this project materializes.

As Baku is at the crossroads of the North-South (Iran-Azerbaijan-Russia) corridor (a tripartite grand project already agreed, signed and sealed by the 3 countries), the interests of Iran and Russia in the project are obvious, as are those of India who wants to use the north-south corridor for her exports to Russia and Europe.

But my plan did not stop at Georgia. Navigating the Black Sea, my Missing Link would extend to Istanbul, Thessaloniki and Costanza and from there, through the Danube-Rhine fluvial system, it would end up to central and northern Europe (Rotterdam) (see map).

I am therefore pleased to report that, at a meeting in Bucharest last week, the Ministers of Foreign Affairs of Turkmenistan, Azerbaijan, Georgia and Romania signed a declaration on the development of the Caspian Sea - Black Sea international transport corridor (CSBS-ITC).

PS: A "discerning eye" would have already spotted our next project on my "Missing Links" map: Connecting the Upper Gulf port system of MAK (Kuwait)-Umm Qasr (Iraq)- Bandar Imam Khomeini (Iran) -three ports, in three different countries, at a spitting distance of each other- to the Mediterranean Basin (Lebanon or Syria or both), and from there to the Port of Piraeus and to the EU. The connection of the Upper Gulf Port System to the Caspian Sea (Tehran) would complete the 'big picture', connecting the two projects together, and to the North-South Iran-Azerbaijan-Russia corridor which, eventually, will extend, by sea, to India (Bombay).

Posted by Professor HE Haralambides at 21:16