Yesterday, COSCO let on its plans of constructing a 25,000 TEU megaship amidst a lot of industry criticism (including Maersk), mostly from people who fail to understand (or do they?) that, in container shipping, not everything is dollars and sense; most definitely not in China. Although the Chinese economy is letting off steam since 2016, it is no secret that China intends to become the world’s leading maritime nation par excellence, in shipping, ports and shipbuilding. In this sense, it was not by accident that China announced, also yesterday, that «such ships ‘befit’ the country’s Belt & Road Initiative (BRI)». My personal forecast is that, in three years’ time at most, COSCO will have overtaken Maersk as the world’s largest container carrier.
However, megaships and high frequency of service mix a very explosive cocktail and filling the big ship is easier said than done. Fortunately, carrier cooperation through global shipping alliances has come to the rescue, but will COSCO (and others of course) be able to fill such ships by itself if its alliance with CMA CGM comes under attack next year?[1] We shouldn’t forget that, for EoS to be had, the ship must sail full; otherwise, economies of scale become diseconomies of scale.
Years back I had shown that there are significant EoS to be had in shipbuilding, up to Panamax-size vessels (about 4,700 TEU). After this point, the unit cost curve flattens, with only marginal gains to be had (see Fig. 1). Following the thinking of Kendall (1972)[2] of almost half a century ago, I have also shown (see Haralambides 2017[3]; Fig. 4 on p. 12) that in situations where the ship has to be turned around within a fixed time frame, say within 48 hours irrespective of her size, it costs more to handle a container arriving on a large ship than one arriving on a smaller one. In other words, cargohandling time per TEU is higher after a certain ship size, and this is a distinct “port diseconomy of scale”. 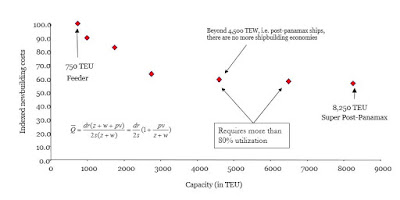 Fig. 1: EoS in Shipbuilding (Source: Haralambides & Associates)
It is not so difficult to understand why: As crane productivity cannot be stretched much beyond 30 moves/h (it actually declines after a certain crane density[4]), the only way to serve a larger ship in the same time (48 h) is by adding more and bigger (in terms of air draft and outreach) cranes. However, increasing crane density reduces crane productivity, among others nullifying the advantages of having bigger hatches.
Stopford (2008)[5] arrived at a similar result, this time however for total costs per slot in the Atlantic trades. Stopford’s unit cost curve starts to flatten at a higher tonnage (about 8,000 TEU), given the significant EoS to be had in ship operations and propulsion. After this point, however, there are only 4% savings, all the way to 18,000 TEU ships (Malacca-max).

Big ships impose substantial demands on port capacity, without, however, paying commensurately for this demand. For instance, where before we could accommodate simultaneously three Panamax vessels (i.e. three berths) along one kilometer of quay-wall, today we can host there only two mega-vessels of the latest generation (about 400 m long). Berth utilization obviously goes down and so does the utilization of ship-to-shore (StS) cranes, for bigger ships mean lower call frequency.

All this would be fine, as long as carriers were bringing more traffic to the port with their larger vessels. But this doesn’t happen either. As Fig. 2 shows, call size is only moderately correlated with vessel size. 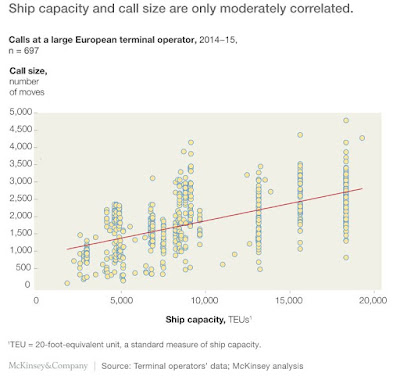 Fig. 2: Ship size vs. call size
More importantly, one needs fewer bigger ships, and fewer port calls, to serve a given amount of yearly demand. Thus, the infamous UNCTAD connectivity Index[6] goes down and, with it, the contribution of shipping to trade and development. Here too, berth and crane utilization decline and this impacts on the capital costs of the port and of the terminal operator. In addition, a reduction in the frequency of carrier itineraries (i.e. number of services), caused also by slow-steaming, impacts the inventory costs of traders, thus defying the very principles of supply-chain optimization, and this is a clear diseconomy along the supply chain. Finally, filling up the bigger ship in Asia is easier said than done. To do so, the ship must call at more Asian ports than what her size would warrant, often picking up containers at random and at short notice, without due consideration to the importance of proper stowage planning. As a result, ship and terminal stowage planning at the other end (Europe/North America) often becomes a nightmare.
HE Haralambides
(for the full story click here)


[1] Review of the EU Consortia Regulation.
[2] Kendall, P.M.H. 1972. A Theory of Optimum Ship Size. Journal of Transport Economics and Policy IV (2): 128–146.
[3] Haralambides, H.E. 2017. Globalization, Public Sector Reform, and the Role of Ports in International Supply Chains. Maritime Economics & Logistics 19 (1): 1–51.
[4] Crane density is defined as the number of cranes per 300 m of quay length.
[5] Stopford, M. 2008. Maritime Economics, 3rd ed. London: Routledge.
[6] UNCTAD’s concept of connectivity is broadly described by the number of weekly services and liner companies active on a certain route. Bigger ships and shipping alliances reduce both the number of services (bigger ships) and the number of (independent) competitors on the route (alliances). For more information on UNCTAD’s Connectivity Index, see Fugazza and Hoffmann. 2017. Liner Shipping Connectivity as a Determinant of Trade. Journal of Shipping and Trade 2: 1.
Posted by Professor HE Haralambides at 22:18