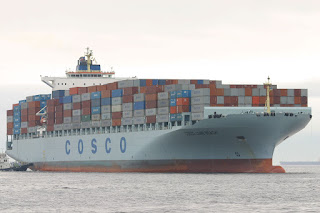 The proposed merger of COSCO and China Shipping will create a maritime giant which will dwarf by far Maersk line; the current market leader. In the face of a declining global demand, carriers try to reduce costs through such consolidations, as well as achieve market shares which, in the long run, should hopefully maximize shareholder value. However, such costs are created by the carriers themselves, by building ships of such sizes that they are unable to fill by themselves. Mergers and alliances are thus the obvious outcome. I am curious to see the reaction of the Chinese competition authority, when last year it gave the thumbs down to the P3 alliance (Maersk, MSC, CMA-CGM), assessing it not as an alliance but as a merger. Certainly, DG-COMP in Brussels are not going to be easy, after the tough stance they took against their own companies, when Maersk bought P&O Nedlloyd 10 years back. Assuming the merger will go through though, CKYHE –the COSCO Alliance- will not be allowed to continue under its current membership composition (COSCO; K-Line; Yang Ming; Hanjin; Evergreen). We see... HH
Posted by Professor HE Haralambides at 10:18