Industrial action at the port of Rotterdam 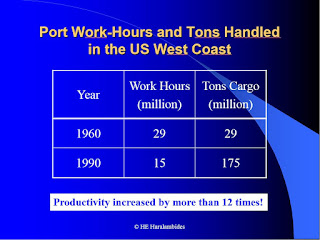 Due to the regularity, frequency and predictability of port business that containerization brought about in less than 50 years, casual labor has been regularized and port work has become a respectable and well-paid profession. Many people might still remember the old days when, each morning, the dockers would show up at the gate where a tallyman would thumb in those needed for the day, usually with criteria such as age and physical strength (if not with some other criteria of a more ‘pecuniary’ nature…). The rest would go back to the tavern, or to whatever else it was they were doing, waiting for the next day and hoping for the best. During those days, shipping was a very risky and unpredictable business. Once a ship set sail, God only knew if, when and where she would end up to. Often, in banking, risky loans are still called ‘sea loans’.

The new container-handling technology, on the other hand, substituted capital for labor and it was thus strongly resisted, if not sabotaged, by trade unions. Incidentally, the word sabotage derives from the wooden shoes (sabot, or the famous Dutch klomp) workers wore on the sweat-floor, which they were throwing onto the new machines that were stealing their jobs, in the early years of the industrial revolution.

But as port labor was being made redundant, port productivity was increasing by leaps and bounds. The graph I attach shows increases in labor productivity in the 30 years since the introduction of containerization in the 1960s. Labor was cut in half, while tons handled went up 6 times, from the time when a strong young man would swing a sack of flour over his left shoulder and walk up the gangway, to the  day when a quay crane driver would do 12 times that much (and of course much more today), with a joystick in hand, sitting somewhere comfortably, even remotely from home through an internet connection. And it was this increase in labor productivity that allowed the fortunate dockers who stayed with the job to enjoy the high salaries -the exceptionally high salaries, some would argue- they do today (if one drives around a modern port today he will see more Mercedes and BMW parked there than in any other part of the city center).

Higher taxes were consequently paid to the government, whose role is to redistribute income and wealth to those who, as a result of technology, have lost their job. There is little doubt, in a civilized society, that those who lose their job must be respectably compensated. And there are laws and strict restructuring procedures for this purpose, which didn’t evolve overnight. In the Netherlands, labor restructuring procedures are amongst the most advanced (and generous) in the world. Sometimes, the restructuring process has been painful; elsewhere, like for instance in Malaysia, it was plain sailing, with more than generous severance packages and golden handshakes (for interested readers, in the mid 90s, and after having looked at more than 100 ports around the world, I wrote 3 reports for the International Labor Organization (ILO) which culminated in my guidelines for successful port privatization -available on academia.edu). Having said this, though, if in today’s world one believes that jobs can be guaranteed at the cost of progress and competitiveness, he is under a big fallacy. Employment today is as much a right as it is an obligation. By this I mean that the worker can no longer sit back and enjoy life as before, but often he has to take life and his future in his own hands, improve, better himself, invest in new competences and skills, or look around for new opportunities even outside his sector; and he should do this sooner rather than later.

The port workers in Rotterdam claim that the port is creating too much new capacity and this will cost jobs. This is not true. Excess capacity does not cost jobs and in Rotterdam, before Maasvlakte II was developed -a project that had been discussed for more than 20 years- the port had lost, in 10 years, 10% of market share to Antwerp and Hamburg, just because it didn’t have enough capacity.  The real problem is that the new capacity is highly automated and labor-saving. But this is not bad, and is a fact of life. Since the days of the industrial revolution, capital has substituted for labor and it was only through innovation, implementation of advanced technologies and the consequent increases in labor productivity that we have the advanced economies, societies and welfare systems we are enjoying today (so far…).

The Netherlands is well known to all for its famous polder model: A model where the social partners - employees, employers and Administration- sit around a table and eventually come up with the white smoke of a reasonable win-win solution. Industrial action is not common in this country, to say the least. I am quite confident this will again be the case, and the unfortunate incident of today’s strike, causing millions of euros in damages to the country’s economy, will soon be a regrettable history, allowing this great port, the port of Rotterdam, to continue unhindered being the indisputable leader of the European port industry. HH

Posted by Professor HE Haralambides at 09:13