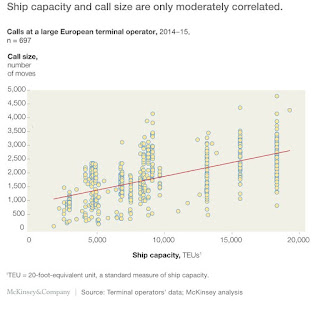 In my post of January 5, 2016, I was writing that big ships impose substantial demands on port capacity, without however paying commensurately for this demand. For instance, I was writing, where before we could accommodate 3 Panamax vessels in a one kilometer berth, today we can host there only two mega vessels of the latest generation (about 400 meters long). Berth utilization obviously goes down. And all this would be fine, as long as carriers were bringing more traffic to the port with their larger vessels. But this doesn’t happen either. As the graph shows,  call size is only moderately correlated with vessel size (the red regression line is quite flat). In such a situation, i.e. as carriers demand more berth space without bringing, proportionately, more traffic to the port, it would make a lot of sense to think of a different, revenue-neutral, terminal charging system, based on ship-dimensions rather than $/box.

[I have chosen above the word ‘dimensions’ rather than ‘length’, for it is really bay size the critical factor for both crane- and berth productivity. Obviously, it takes twice as much time to unload a container stowed below-deck in  row 23,  than one loaded on-deck in row 1; and this without considering, of course, the substantial costs of investing in quay cranes with a 70-meter outreach].

Could differential- or variable pricing work, as a new system of Terminal Handling Charges (THC) aiming to offer carriers incentives to improve stowage planning? If the answer is ‘yes’, this could offer carriers faster turnaround times (and time is money), and ports better berth utilization; a truly win-win situation. The issue of stowage planning, these days, is not a theoretical but a real and often troublesome one: Intra-alliance cooperation notwithstanding, in order to fill a larger ship today, a carrier calls at more loading ports than would be warranted by the economics of a hub-and-spoke system, picking up containers even at the last minute before departure. Stowage planning suffers as a result. As one terminal operator commented, “we can do 150 moves per hour for a major independent carrier but only 100 for an alliance ship”. Slot swaps among alliance members do not make things easier either, with shippers booking containers with one company, only to find out that they landed at the other end on the ships of another carrier.

Variable terminal pricing, if it will ever apply in practice, should not become a form of yield management, so successfully, albeit also so frustratingly, applied in aviation (how many times haven’t you tried to book a flight, only to see the price going up while you were trying to do so), but also by the ocean carriers themselves through their market segmentation strategies: pricing strategies directly targeting the individual shipper and his willingness to pay for various logistical add-ons (a more technical post on this will follow soon). As already said, variable pricing should be a ‘revenue-neutral’ charging system, aimed at promoting higher ship and terminal efficiency. After all, yield management could never succeed if applied by an individual port, for, solely by itself, a port has very little pricing leverage vis à vis the footloose container and its carrier. Moreover, any attempt to extract more revenue through yield management would be music to the ears of that port’s competitors, who in all likelihood will leave their own prices unchanged in order to capture the carriers' discontent (competing ports are facing a kinked demand for their services).

The above bring me to another issue, far more important, that of variable pricing, or price discrimination, between local and transshipment cargo: i.e. a cross-subsidization practice that definitely ought to be avoided, if not to be forbidden by public policy intervention. (to be continued…). HH

Posted by Professor HE Haralambides at 11:00