Containership sizes and port planning: As small as possible but as big as necessary 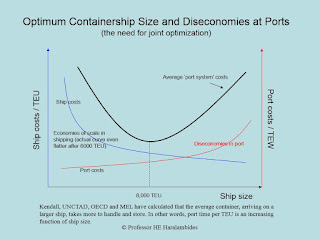 If you ask an ocean carrier how big a port should be, he would immediately tell you “as big as possible”. Apparently, he wouldn’t want to wait even for a minute if he could help it, and we have well established that, at a port capacity utilization of around 75%, congestion starts to set in. If instead you ask the same question to a port manager, particularly one responsible for the returns on his money, the answer would be “as small as possible”. Obviously, he would love having ships queuing up outside his port, like the good old times, if he could help it. As usual, both need to put some water in their wine: the ship cannot wait, nor however can the port continue spending taxpayer money so that the ship does not do so. This is particularly so in increasingly commercial activities, such as those of transshipment container terminals, whose impacts are not localized in the economies which have borne the brunt of the investment, but are rather dissipated throughout the supply chain, from the country of origin to the country of final destination of the transported goods.

Big ships impose substantial demands on port capacity: A 1 kilometer berth could host 3 panamax ships simultaneously before, but it can accommodate only 2 of the larger containerships of today. As call size is only moderately correlated with vessel size, i.e. as carriers demand more berth space without bringing, proportionately, more traffic to the port, it would make a lot of sense to think of a different, revenue-neutral, terminal charging system based on ship-dimensions rather than $/box. Moreover, OECD and MEL have calculated that the average container, arriving on a larger ship, takes more time to handle and store. In other words, port time per TEU is an increasing function of ship size. The “supply chain” diseconomies of scale of larger ships, including their impact on shippers’ inventory costs, start from the port (graph).

The situation is not helped much by the increasing competition between neighboring ports aimed at stealing transshipment traffic from each other. This is particularly worrying with publicly funded port investments. Clearly there is a need for public policy intervention, at least in Europe which needs to harmonize public spending among its member states, as well as ensure free and fair competition among its ports. I hope to see this taking effect in the forthcoming EU state aid guidelines which should include, finally, indications on what is public port investment and what is investment benefiting identifiable users who should in all honesty bear the cost of its development and maintenance (user pays).  HH

Posted by Professor HE Haralambides at 11:54